There have been countless Catalan takes on Yerry Mina potentially moving to Everton or elsewhere this summer, as Barcelona can hardly believe their luck.

For the second half of last season there were numerous claims in Barca’s local media that the club thought they’d made a mistake hiring the Colombian defender, and that he didn’t look close to being ready to battle seriously for a starting place.

A move was already being planned, but Mina’s good performances at the World Cup have upped his value considerably. That means there’s the chance of a good permanent transfer, and a possible buy-back option.

Now there’s a small slant from Colombia, with daily newspaper PubliMetro saying a transfer for Mina is ‘imminent’. 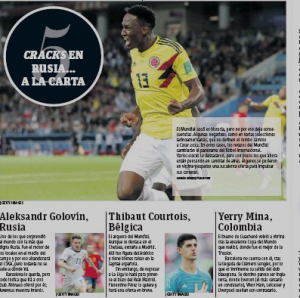 The possible destinations named are Everton, Liverpool, West Ham and Leicester City, but it’s stated the footballer is closest to a move to the Toffees.

It’s being talked up in the player’s home country, with PubliMetro claiming those clubs are ‘dreaming’ of the signing.

The claim of a move being imminent and Everton being the likeliest destination completely backs up what the Catalan media are reporting today.

Given both newspapers are Tuesday editions, it’s unlikely one has copied the other.

Thomas Tuchel turns down chance of signing left-back for Chelsea –...