There’s been some growing confidence in the Spanish media that Athletic Club Bilbao are set to seal the signing of Ibai Gomez from Alaves.

Continually, Leeds United are mentioned and the Championship club are thought to be a major competitor to the Basque side.

Gomez’s contract with Alaves expires in June and so far the club haven’t had any success with their efforts to get him to sign a new one. That presents a decision of whether to sell in the January window or risk losing the player for free at the end of June.

The confidence for Athletic likely comes from their new president speaking out publicly. AS quote Aitor Elizegi as saying: “We need Ibai, we have all missed him in the last two years. I don’t know how he will be in Alaves, there are still six months left to finish his contract.” 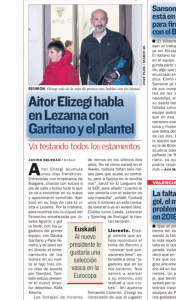 Those comments have encouraged the press because it will be thought unlikely Elizegi would go public unless he felt a deal on the right track.

Leeds United are also trying to lure the player for January, and a figure of €4m is once again suggested.