A year ago, Yerry Mina hadn’t even signed for Barcelona yet.

Still at Palmeiras, the defender was awaiting his move to the Catalan club. He didn’t last long, and quickly after his arrival there were already leaks to Barca’s local media about the player surprising teammates with a low level in training.

It was thought he wasn’t anywhere near ready for the club. Licking their transfer wounds, Barca looked to loan Mina elsewhere in Spain from the summer onwards, hoping he could find his feet and get used to Spanish football.

The World Cup changed all that and Everton provided more money than Barcelona would have thought was possible before the Russia tournament.

Ahead of the January window, the club has signed Jeison Murillo from Valencia, and Marca have got some of their South American experts to compare the two Colombians.

Whilst Mina has the edge physically and in the air, it’s thought Murillo is far better technically so will suit his new club more. Jonathan Sachin explained: “In this aspect, Murillo is a thousand times better than Mina, we all know it.” 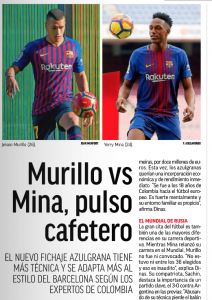 Jaime Dinas thinks both are ‘extraordinary’ players, he but again highlighted the difference: “He (Murillo) is more technical and faster. His style is more for Barcelona than that of Mina.”

Murillo wasn’t even called up for the World Cup training camp of 36 players, and Sachin explained it was in reaction to an earlier 3-0 defeat to Argentina: “Abusing his technique, he loses the ball and that results in the third goal. All the press fell on him.”

Mina has had a mixed time so far at Everton, showing the best and worst of his game and making it clear he needs work to get a good level of consistency.