On Saturday, we covered claims from Spain that Leeds United are considering signing Jese Rodriguez.

The former Real Madrid player is still owned by PSG but his move to the French club was something of a disaster from the start. He’s spent the second half of this season on loan at Real Betis and it hasn’t gone to plan.

With only two goals in his 18 Betis appearances, the club has no intention of trying to get a permanent deal, there’s not even any talk of another loan.

Marcelo Bielsa’s side would be taking a huge gamble on the player, much in the same way Stoke City. The club hyped up Jese’s arrival and it was clear things wouldn’t go as well as hoped, and that turned out to be the case with the signing a huge mistake and Stoke relegated.

Jese’s CV since his Madrid exit is poor, and that’s without touching upon all his off the pitch issues.

But there’s some good news. 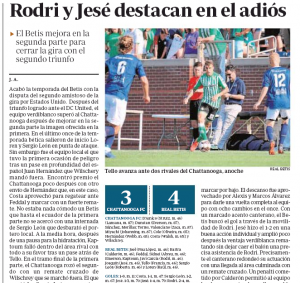 ABC Sevilla report he said ‘adios’ to Betis in style yesterday, putting in a really good performance and scoring two goals in a 4-3 victory.

However, that was in a US friendly against FC Chattanooga.

There’s nothing further in Spain on the Leeds claims, and the same can be said for PSG’s local media.