Leeds United continue to be linked with potential signing options in Italy, as agents and Andrea Radrizzani’s connections remain keen to present potential options for the Premier League club.

The latest report comes from Tuttosport, with the newspaper stating the Whites, along with Leicester City, are both in the picture to sign Tommaso Pobega.

The 21-year-old central midfielder joined the AC Milan youth system in 2013 and worked his way through the ranks until it became clear he required loan moves to get more experience. That’s seen him sent to Ternana, Pordenone and Spezia, featuring regularly during all three spells.

It’s at Spezia that Pobega has really started to catch the eye, and Tuttosport believe Leeds United and Leicester have already come forward for the player, presumably moving to get some information on the potential signing. 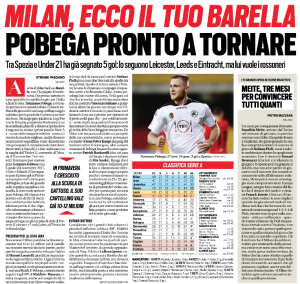 According to the report they’ll face a tough task, with Milan believing their player has a big future, and Pobega naturally keen to succeed with the Rossoneri eventually.

The Serie A club could ‘easily’ get over €10m should they sell, yet Leeds United and others will have to be convincing if they’re going to build a deal.