There’s some disagreement in Italy over what’s happening with Rodrigo De Paul and Leeds United.

On Saturday, Gazzetta dello Sport said Udinese were dismissing reports of a quick transfer, and it was explained the possibility of the Argentine staying for the current season was very real.

Udinese started out by wanting €40m and insisted they wouldn’t be accepting anything less than that. Last week the figure dropped to €35m, and then it was suggested a deal worth €30m plus €5m in bonuses could be accepted.

Sunday’s edition of Corriere della Sera reports there’s been progress and De Paul is now ‘one step away’ from signing for Marcelo Bielsa’s side.

Negotiations, which have been ongoing for two weeks, saw developments in recent hours 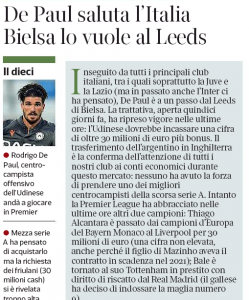 and it’s now thought the move is close.

According to Corriere della Sera, Udinese should be getting a fee in the region of €30m plus further bonuses. There’s no indication of how much those bonuses are worth.