A few days ago we covered claims from Bild that Leeds United are keen on Kristian Pedersen.

The 23 year old was said to have ‘aroused the interest’ of the Championship club. Playing for Union Berlin in the Bundesliga 2, it would be an odd one for a German newspaper newspaper to fabricate, so there looked to be something in the claims.

As we pointed out, the Danish left-back is represented by Boutique Transfers, who also manage Zanka and Jonas Lossl, both of Huddersfield Town, Martin Braithwaite, owned by Middlesbrough and on loan at Bordeaux, and West Ham’s Winston Reid.

That provides plenty of experience negotiating moves to English football.

Saturday’s edition of Markische Oderzeitung has a look at Union Berlin’s transfer situation, 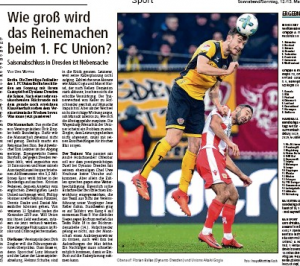 and it’s claimed there’s now said to be an offer from Leeds. Given Bild didn’t mention an offer, this looks a step forward.

One of several Union players with contracts ending in June 2019, the newspaper says they must be sold now if the club wants to make any money.