From what we can gather, there was a poll held on Monday, or over the weekend, asking Leeds United fans who they’d like to be the club’s next manager.

Taking over at Swansea City when the Welsh club didn’t look to have a hope of surviving in the Premier League, Carvalhal had an immediate impact and in the end it was disappointing when relegation to the Championship was confirmed.

His lighthearted style won over fans, but there’s not been a huge backlash against him leaving. It was much the same at Sheffield Wednesday, where supporters probably appreciated Carvalhal as a man more than they did as a manager. 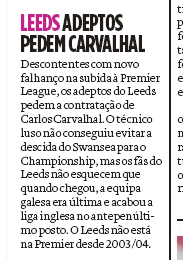 Nevertheless, Portuguese newspaper O Jogo are sticking up for their man, and understand why Leeds United supporters apparently want the manager at Elland Road.

Of course, there’s no claim of any genuine interest, but this is Portugal and it’s surely possible an agent will see the links and have a lightbulb moment.