Antoine Griezmann has long been attracting interest from Barcelona and their ongoing pursuit of the player has been the reason for unhappiness at Atletico Madrid.

Now, Lionel Messi has joined the list of people associated with Barcelona to publicly talk about Griezmann.

Catalan newspaper Mundo Deportivo claims Messi’s comments suggests the Barcelona star has given his blessing to sign Griezmann this summer. The South American star has joined Suarez to welcome the 27-year-old forward ‘with open arms’.

Atletico players believe the forward is convinced to continue at Wanda Metropolitano. However, Barcelona stars are ‘convinced’ that Griezmann will arrive at Camp Nou and will be wearing their shirt next season. 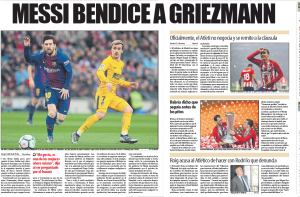 Griezmann’s release clause of €200m will be reduced to €100m from 1 July. Even though the player wants his future to be sorted out before he travels to Russia with France for the World Cup, the release clause could see Barcelona announce the deal after this summer’s Fifa tournament.