Here we are for another Bruno Fernandes round up. Three Portuguese newspapers bring interesting updates today, none of them agreeing with what has been said by the Italian media on Tuesday afternoon.

Starting with newspaper O Jogo, they bring a headline saying there’s one crucial condition for the deal to happen: Bruno Fernandes must play against Benfica on Sunday.

The newspaper then takes claims from ‘renowned journalist Gianluca Di Marzio’, but says they’re not true, because Manchester United’s interest hasn’t been made formal yet.

It’s claimed that after several trips between England and Portugal, agent Miguel Pinho has already made the needed ‘bridge’ between clubs, and is now showing the demands to Manchester United.

Record has a big story, with most of the information coming from the English and Italian press.

But they open their article saying it’s very likely that Bruno Fernandes’ will wear Sporting’s armband for the last time next weekend.

Because although the Lions are still to receive an official offer, there’s the ‘conviction’ that the bid present by Manchester United will leave no margin for negotiations. 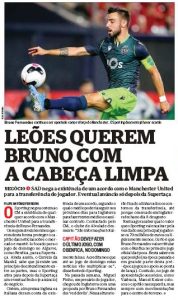 “It’s totally false information. We believe that before Sunday’s game this news will multiply.”

However, Correio then claims to know there’s an ‘agreement in principle’ between the three parties. Sporting want Bruno’s with ‘head clean’ for the match against Benfica, so the closure of a deal and an announcement would only happen after Sunday’s game.

Again, it’s worth pointing out Correio have been the most sensationalist throughout this.