Mundo Deportivo reported on Thursday that Celtic defender Dedryck Boyata has been identified as a transfer target for Valencia. Now there’s a twist.

The same publication has a story on the Belgian international and this time he has been linked with a move to Villarreal. Before we talk about the La Liga outfit’s plans for the ex-Manchester City man, let us take a look as to why the club is in the market for a centre-back.

Victor Ruiz, the Yellow Submarine defender is attracting interest from Zenit St Petersburg and they have even tabled an offer of €11m.

His employer is demanding €15m for their player and if the Russian club end up meeting the asking price then they need to find a replacement.

This is when the idea of signing Boyata has cropped up and he is their favourite candidate to replace the Spaniard. The Celtic central defender is also on the ‘agenda’ of Sevilla and Marcelino’s side. 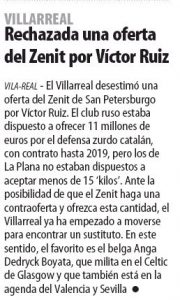 The condition for Javier Calleja’s side to sign the the Bhoys defender depends on whether Zenit will improve their offer for Ruiz on deadline day and should that happen, it will leave Villarreal with limited time to complete the deal for Celtic’s Boyata.