The 23-year-old has just left Benfica to have a one-year loan spell with the Baggies, and is excited to have the playing time he wants.

Starting with his chat with A Bola, the player has talked about the length of his contract with West Brom, and says he’s not so confident he will be back to Benfica next summer.

“I’m a Benfica player, I have a contract and I was loaned for a season to West Bromwich Albion, so you never know. I’m in a good position to play again in a competitive league with visibility, and if I have a good season, West Bromwich Albion or any other club could make a good offer that will lead Benfica to accept.

“Or Benfica may want me to return, I don’t know. But importantly, and what I think now, is to play and show my value, then it will soon be seen, I also believe that playing regularly will give me new opportunities to play in the Croatia national team. That also weighed heavily on the club choice.”

Speaking of the reasons why he’s left, Krovinovic says he wanted more minutes, and also explained the reason why he chose West Brom.

“I left because I wanted to play more, because I need minutes and I would hardly have that opportunity at Benfica. It was a very important decision and the conversation I had with West Bromwich Albion coach Slaven Bilic was decisive. He wanted me a lot here, he knows me well, he motivated me a lot, he told me that I would be a very important player at the club, who have a project to be promoted to the Premier League. Then I talked to my family and we came to the conclusion that West Brom would be the best option.” 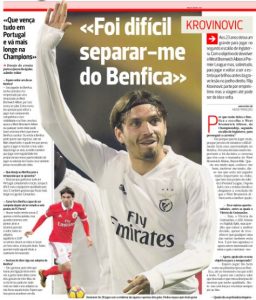 The midfielder is already in preseason with the Baggies, and says he loved the way he was welcomed at the club.

“I’m enjoying it very much, I didn’t know the English were so warm, friendly and open. The Croatians and the Portuguese are similar and are like this too, but the English are twice as much. It was extraordinary how they received me, because they received me really well, coaches, players, physiotherapists, staff… everyone welcomed me with open arms. And I am in a city with about one million inhabitants, multicultural, not so far from London and Manchester and this is also interesting.”

In his interview with newspaper Record, Krovinovic pointed out that Slaven Bilic has been trying to sign him for a while now.

“He really wanted me to move and the club too. It was more for that reason. Bilic is very fond of me and also wanted me when he was training Al Ittihad from Saudi Arabia, but in January Benfica didn’t let me go on loan to the end of the season. We talked again later, and it all worked out. Now I hope that, in a few months, this experience will open the door for Croatia. Before I got seriously injured, I spoke to the manager on the phone and he told me to get ready because I could even go to the World Cup. Then I had that bad luck…”

He was also asked if Benfica were tough negotiators, but he says things got easier once a proposal from England came.

“They were a little, but that’s how business works. One side pulls on one thing, the other side pulls on another… There was the possibility of going to Vitória Guimarães, but I preferred West Brom and I ended up coming. When I saw that there was a chance to go to England I knew 95% that Benfica would let me out.”