Home Europe Jurgen Klopp ‘has reports on his table’ with regards to signing La...
SHARE

Marca have a report on Athletic Club Bilbao’s Inaki Williams in their Thursday edition, and it’s explained that Borussia Dortmund are very keen on the player. The Spanish newspaper say that’s not the only interest, with Jurgen Klopp eyeing Williams for Liverpool too.

Klopp ‘has reports on his table’ detailing the player’s talents, and Marca explain that Liverpool have been following Williams’ progress.

For Dortmund, Williams would be a replacement for Pierre-Emerick Aubameyang, who talked about a possible move again over the past few days. It’s the speed Williams has which makes Dortmund think he’d slot in perfectly, and Liverpool will have noted that too. 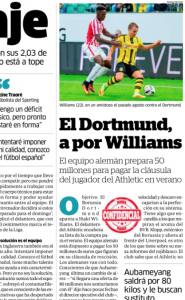 The price for both Liverpool and Dortmund would be €50m. That’s Williams’ buyout clause at the Bilbao club, and they won’t accept a penny less for the player.

Liverpool surely wouldn’t be going to the extent of letting Klopp go through reports and consider a move if they weren’t prepared to pay the €50m, there’d be no point.

Only recruiting players eligible through Basque birth or direct heritage, Athletic are very limited with their recruitment pool, and therefore won’t bend on fee for a player they want to keep. So it would be €50m or nothing for Liverpool.