Bojan moving from Stoke City to Middlesbrough was rumoured for much of the winter transfer window, and the potential deal was one of a selection which slipped out of the grasp of Aitor Karanka.

The Middlesbrough manager has been left frustrated with the club’s transfer business and hasn’t hidden his feelings, making it publicly very clear he’s not at all happy.

Jese Rodriguez signed for Las Palmas, with there likely being nothing Middlesbrough could do to stop that. That player didn’t want to sign for the club, and it’s likely Karanka persevered for longer than he should have done.

Las Palmas suits Jese, and he’s arrived as a star with ‘Jesemania’ taking over Gran Canaria. He’s loving every minute, but it would have been very different at Middlesbrough, and it’s likely fortunate for Karanka that the move didn’t come off. 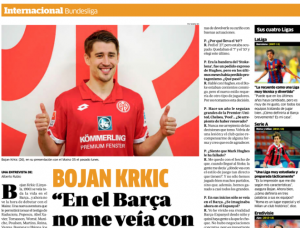 The Stoke owned player said “It was the team that best met the Stoke requirements for a transfer of four months and it seemed good.”

Marca, who were speaking to Bojan and so are pretty well informed, say those requirements were that Stoke didn’t want to strengthen a rival Premier League team.

Ahead of future transfer windows, it’s probably useful if Karanka and Middlesbrough agree on accessible targets, rather than relationships becoming strained whilst chasing dead-ends.