While this summer has seen plenty of big moves, there’s been a real push for clubs to sign young talent and look to the future.

Several young stars have already made their moves and Juventus striker Moise Kean could be joining them.

Kean has been linked with a departure from Juve all summer long, with Everton, Borussia Dortmund and Arsenal thought to be keen, primarily because his contract expires and he’s yet to sign a new deal at the club.

The Serie A champions have been wringing their hands over the young star, unable to decide whether to sell him outright, sell him with a buy-back option, loan him out or get him to sign a new contract and work from there.

Tuttosport cover the Kean issue today and it seems Juventus have finally put some sort of plan in place for what they’re going to do with him this summer.

First, they want to get Kean signed up to a new deal as soon as possible, with a contract until 2024 on the table. Once that’s sorted, they’ll look to moving him out so he can get the game time that he needs.

The club are willing to concede to a ‘dry loan’ or a sale that includes a buyback option, as they don’t want to lose Kean in future given he’s not only a top talent but a big economic asset as well.

It’s the inclusion of the buy-back which is causing the most problems. Arsenal have already offered €35m for the striker but that deal didn’t include a repurchase option and was swiftly rejected.

They are not the only club interested, though, with the newspaper saying Everton have ‘remained vigilant’ and Borussia Dortmund are doing a ‘survey’, which presumably means they’ve asked if he’d be available. 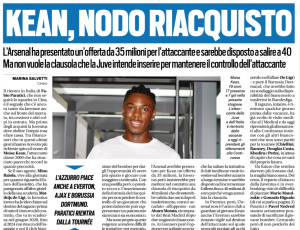 What they do concede is that Kean’s future is now looking like being away from Juventus and that Fabio Paratici and Pavel Nedved are ‘seriously thinking about sacrificing the young bomber’ but not losing him completely.

That gives hope to both Everton and Arsenal that there’s a deal there to be done and Juventus new strategy, coupled with their need for sales, offers both clubs the chance to get the move completed.