Rejecting £54m from Inter for Romelu Lukaku, Manchester United once again made it clear where they stood regarding the Belgian striker.

The club value their forward at around £75m (€83m), which the Serie A side can’t afford, and they are refusing to budge.

We already all know this, as it’s been drilled in our (and your) heads all summer, and Corriere dello Sport explain an ‘important departure’ would be needed to increase the chance of ‘white smoke’ (meaning a positive outcome).

What does help the Italians, however, is the fact Manchester United reportedly want the money to finance the Belgian’s replacement.

Nicolas Pépé is mentioned as the preferred option over Pierre-Emerick Aubameyang, and both would fit Ole Gunnar Solskjaer’s plans far more than Lukaku does.

This deal might go down to the wire, as the Red Devils could end up having to wait for Inter to sell the likes of Mauro Icardi and Ivan Perisic in order to receive more than the €60m already offered. 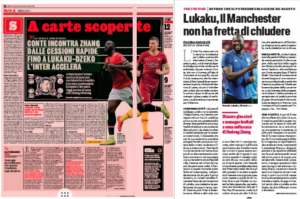 Gazzetta dello Sport’s article has similar ideas, as Steven Zhang, the club’s chairman, has told his board they cannot afford to go any higher than the rejected offer without sales, and he will reiterate this to Antonio Conte later on on Monday during a team dinner.

Despite this, the Italian manager continues to push, as he knows the Red Devils want the money to gift Solskjaer a more suitable forward (Pépé is mentioned once again, as is PEA), and there’s hope the need will overtake the want.

With two and a half weeks left in the window, there’s still plenty of time for things to happen, and there’s no real reason to complain until August 9th (at the earliest).

Furthermore, it’s worth pointing out the Serie A window continues on for two more weeks after the Premier League’s, so there’s also the possibility of Lukaku’s deal going through then.

If Manchester United know by, let’s say, August 3rd they will get the money for the Belgian before the end of the month, then they could easily sanction his replacement’s purchase before the deadline to then sell the Belgium international to Inter after it, once the Italians have their finances sorted.

So many possibilities, but there continues to be belief in Italy this one could get done… eventually.