Juventus are working hard to replace Dani Alves this summer, and the latest right-back to be linked to them is perhaps unexpected.

According to Portuguese newspaper Record, the Old Lady have recently opened talks with Southampton to get to know the possibility of a Cedric Soares transfer.

The first conversation was just to know the player’s price, something that Record doesn’t reveal. The newspaper treats the deal as an ‘idea’, making it clear that things are far from done yet. 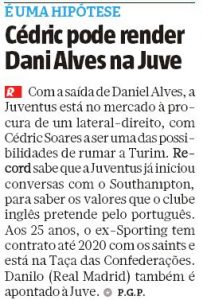 Soares is currently playing the Confederations Cup for Portugal, and has been starting over Benfica right-back Nelson Semedo, priced at €35-50m, who has been linked to Barcelona and Manchester United.

With the Southampton player being only two years older, and with Premier League experience, would the club make the same kind of demands as Benfica?

Probably. This is Southampton, and whilst they do have a record of selling their best players, they don’t do it cheaply.