Since Brighton & Hove Albion announced the signing of Alexis Mac Allister from Argentinos Juniors back in January, there have been very few mentions about it in the Argentine press.

The midfielder continues to normally play the Argentine League and the Copa Sudamericana, with his upcoming move not being a usual subject in the local media.

Alexis was interviewed at the weekend as he was about to play a very special game. He and his brother Francis, both playing for Argentinos Juniors, were set to face their other brother Kevin, who plays for Boca Juniors, which also used to be the club of their father, Carlos Mac Allister.

Alexis spoke to Olé about his father’s support and the bets with his brothers. And he was also asked about Boca Juniors, since before being announced by Brighton, he’d been heavily linked to the Bombonera side. 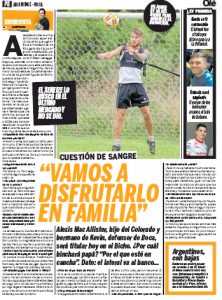 Asked about the future, he knows he’s committed to the English club, but still seems pretty unclear about what will actually happen.

“The future and the options we will see later. Today I am at Argentinos Juniors and I don’t think of another side. In June, I’ll join Brighton and see what happens,” Alexis Mac Allister told Olé.

Now would the player be looking for an extended period in Argentina and only then move to England? Alexis is 20 years of age, turning 21 in December, and it doesn’t seem very likely that Brighton would be keen to wait much longer.