When it comes to Alex Sandro’s future being discussed in the Italian media these days, it’s mostly all been about Manchester United and PSG.

Monday’s edition of Tuttosport stated the price for the Brazilian left-back had dropped to around €35-40m, which could be more enticing for the interested parties, with Chelsea and Paris Saint-Germain waiting alongside the Red Devils.

However, Tuesday’s newspaper throws another club into the mix, claiming Manchester City have now joined the race, as they seemingly search for an option to complement Benjamin Mendy and allow for rotation.

Pep Guardiola was forced to improvise with the likes of Oleksandr Zinchenko and Fabian Delph last season when the France international got injured, and it would seem he isn’t planning on running that risk again. 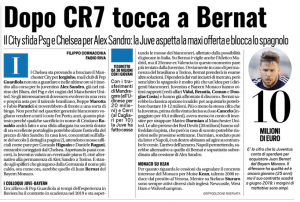 At €35-40m, the Alex Sandro option would be one worth considering, even if last season’s performances weren’t quite up to the standard the Brazilian has known to produce in the past.

Should offers start coming in, there’s a good chance a bidding war could break out between all the interested parties, which would suit Juventus just fine.

The more they sell him for, the better.

As of now, however, nothing has landed on their desk.