Falling down the league table after a blistering start to their campaign, Chelsea and Maurizio Sarri are now in danger of missing out on Champions League football next season, again.

The Blues’ form has been something of a rollercoaster, and a growing discontent has emerged within the Stamford Bridge faithful, leading to calls for the Italian to be sacked in the near future.

However, there have been reports that some on the Chelsea board would like to steer away from a large managerial turnover in order to favour a more stable approach, therefore giving Sarri more time to make this team his own and implement his ideas.

In the meantime, stories in Italy of Roma’s interest in the former Napoli manager keep trundling along, and Corriere dello Sport on Thursday provide a small update on the matter. 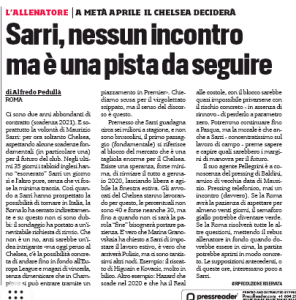 According to them, Chelsea will make a decision on their manager in mid-April, therefore giving him just under a month to prove he is indeed the right man for the job going forward.

Down their end, Roma are probing, having held a number of phone conversations with his agent.

As Corriere put it, they could get the green light in about 20 days if they’re patient enough.

For now, however, they just have to hope Claudio Ranieri turns their season around. Somehow.