Home Championship Wolves have now made an offer for 18 year old attacker, after...
SHARE

The 18 year old plays for Inter Milan but probably needs a move, whether that be loan or permanent, to progress his career at this stage… unless he’s not in a hurry.

That’s led to claims of interest from many clubs and the Wolves interest is being referenced because Cagliari are keen, and the Championship side are seen as competition.

Wednesday’s edition of Gazzetta dello Sport takes things further, by claiming there’s now an offer from Wolves for the player. There’s no explanation of who that offer has been made to, player or club, or whether it would be based on a loan or permanent deal. 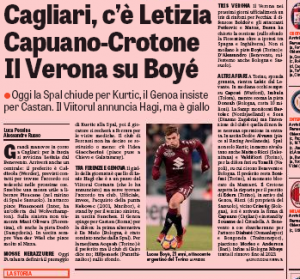 Wolves interest is once again framed within the interest of Cagliari, and that’s the bigger story in Italy.

The Championship leaders don’t seem to have a need for Pinamonti, especially having just signed Rafa Mir, and right now we’re not sure there’s a whole lot in this.

Any interest from Wolves could be being talked up to make Cagliari’s job look harder.