Home Championship “It was an option, as was other big names” – Watford player...
SHARE

Watford saw several of their first team stars leave Vicarage Road in the summer window after the Hornets were relegated from the Premier League last season.

Gerard Deulofeu is one of the players to leave the English club, but only on loan. He joined Udinese earlier this month.

Prior to joining Udinese, there were reports about interest from AC Milan and Napoli. Earlier in September, the former Everton man’s agent even said a move to the Naples club was a possibility.

Gazzetta dello Sport have published an interview with Deulofeu in today’s newspaper. During the course of the discussion, the winger was asked if signing for Milan was an option this summer.

He said, “It was an option, as was Napoli and other big names. Then it was decided for Udinese because I need to play continuously to get back to my level. I live for football and I always want to play, I don’t like being on the bench. If I don’t play I’m not happy.”

“I have to help the team do well, but it’s a good group with a lot of professionalism. Pereira and Pussetto, with whom I was at Watford, help me with the integration. There are Argentines, Brazilians, Spaniards, I’m fine.”

The Watford owned player has returned from a serious injury he picked up against Liverpool in February. 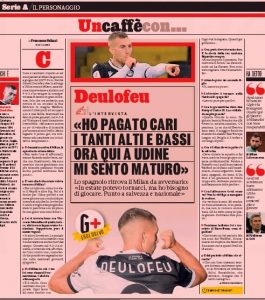 Regarding his fitness, Deulofeu said: “I still lack a bit of speed and intensity to get back to my level. But I scored the first goal, now we just have to change with the results in the league.”

The wideman has made four appearances for Spain and his last was in 2017. Deulofeu said “I work for that too” when talking about his goal of returning to the national team.