There was no way SportBild could put a Bayern Munich transfer feature out without mentioning Leroy Sane.

In this week’s edition, the German magazine mainly focuses on Bayern players who could be coming to the end of their career with the Bundesliga club, yet they still find room for the Manchester City man.

Towards the end, it’s stated Bayern are ‘optimistic’ about signing Sane in the next summer transfer window. It’s claimed the 23 year old has rejected the chance to sign a renewal with his Premier League club, and therefore a transfer is thought to be more likely.

Intermediary Giovanni Branchini is ‘pulling the strings behind the scenes’ and his aim is to try and get a deal at ‘less than €100m’. There’s no explanation on what Manchester City would think about that, although they’ve been pretty patient with Bayern’s public flirting with Sane. 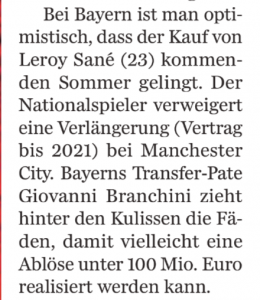 Unless the German international signs a renewal then it’s likely this one just comes down to a matter of cost, with Pep Guardiola’s side wanting to get the best deal they can and help their own funds for incoming deals.