Having left Barcelona for FC Tokyo in 2015, Takefusa Kubo returned to Spain in the last window after Real Madrid completed his signing.

The 18-year-old was allowed to join Mallorca on a season-long loan deal, where he’s made 13 appearances in the league, including a start at the Camp Nou on Saturday.

According to Mundo Deportivo, Barca, Paris Saint-Germain and Ajax were interested in the teenager before he joined Real Madrid.

The Spanish champions ‘loved’ him and the Japanese youngster also wanted to return to his former club.

When Ramon Planes and José Mari Bakero met Kubo’s camp, they found out the gap between what Barcelona were willing to offer and what his camp demanded was too big.

The player’s representative asked for a salary of €2m per year for his client, plus agent commission.

Kubo is a non-EU player and he demanded to be included in Barca’s first team squad. This could have been fulfilled following Malcom’s exit from the club last summer. 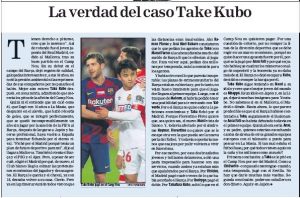 However, the Spanish champions were reluctant to meet the economic conditions for the transfer and therefore, he signed for Real Madrid.

Mundo makes it clear that Barcelona didn’t ‘let Kubo escape’, but decided not to break the club’s economic framework to sign him.

Given this comes from a Catalan newspaper, they were hardly going to say the player simply preferred Real Madrid.