There’s insistence coming from France and Italy on a Manchester United offer for Gabriel Magalhães. Linked more with Napoli and Everton this summer, the 22 year old has been the subject of repeat United claims over the past week or so.

On Sunday, L’Equipe reported five clubs have submitted offers for the Brazilian, with the Red Devils, Everton and Napoli among them. The other two clubs weren’t named.

All of the offers were put at €25m plus a further €5m in bonus payments, and L’Equipe stated the Italian side are ‘still a favourite’.

Over in Italy, journalist Emanuele Cammaroto has been speaking to Napoli Magazine about the player’s situation. He has things a little differently, claiming the Serie A side have offered €22m, and that Manchester United’s bid stands at €27m plus a further €2m in bonuses.

For the English club, agreement from both Gabriel and Lille could arrive ‘in the next few days’.

Despite all of that, there’s a chance Lille are throwing United’s name in to try and 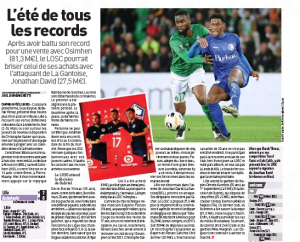 pressure others. Similar has happened before with the French club, most notably with Nicolas Pepe and Victor Osimhen, and it wouldn’t be a shock if that’s the case this time.

Gabriel’s situation has been dragging on for months, with several claims, over an extended period, that he’ll imminently make a decision on his future.