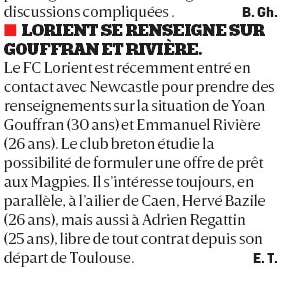 In fact, the Ligue 1 club have already contacted the Championship side to explore the possibility of signing them.

Riviere quite clearly doesn’t seem to feature in Rafa Benitez’s plans for the season, whilst Gouffran has come back in the team in the last two games.

Gouffran has put in impressive performances against Reading and Bristol City after which Benitez revealed he would happily keep him at the club. Benitez even admitted there have been a couple of offers for Gouffran, but not tempting enough for the French forward.

Unlike Gouffran, Riviere’s situation is quite clear. The former AS Monaco forward has just one year left on his contract, and is expected to leave.

Gouffran also has a contract until 2017 at Newcastle, but Benitez’s desire to keep him could make things a bit complicated.