“My only aim is to play regularly for Sivasspor. I have collected information from the technical staff. I looked at the table. We have a chance to qualify to the Europa League. We need to work as hard as we can to ensure that goal. Hopefully I can play a part in that run.” 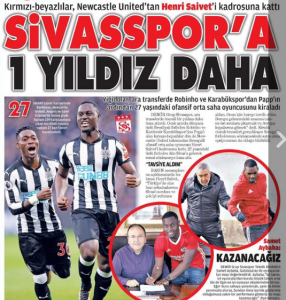 Sivasspor manager Samet Aybaba has confirmed Saivet could make his debut against Galatasaray this weekend, and despite only meeting his new teammates on Thursday he could start the game.

According to various Turkish reports, Sivasspor will also have a right of redemption on the Newcastle United player in the summer.

Saivet only featured in one Premier League game this season and it was always thought the midfielder would leave Newcastle United, with French side Montpellier also showing an interest in the former Bordeaux player during the past few weeks.