Lewis Holtby insists he is feeling good at Blackburn Rovers after a turbulent few years looked to have threatened his career.

The German joined Blackburn on a free transfer back in October after leaving Hamburg at the end of last season.

He has proved to be a star signing for the club, with three goals and five assists in 18 league games helping them to tenth in the Championship so far.

The move has turned out to be productive for both parties, with Holtby suffering a problematic final year at HSV in which he was suspended after refusing to play and saw his relationship with the club completely break down.

Things are back on track in Lancashire, though, and the midfielder says he is feeling ‘really good’ about the club.

“The club has already grown on me, there is a totally familiar atmosphere,” he told SportBild.

“Our stadium still has real flair; it is situated between old row houses. It is as similar as the old Bokelberg in Gladbach. I really feel good here.”

Holtby’s move to Blackburn caught plenty by surprise, with many impressed the Championship club could pull off the move.

The midfielder had plenty of options around the world, befitting for someone who has played in both the Bundesliga, Premier League and Champions League during his career.

He, though, says the decision was an easy one as Tony Mowbray’s side gave him the ‘best feeling’ when he weighed up his options, and he’s now eyeing success and, hopefully, a trip to Wembley.

“Blackburn was the first club that tried to get me,” he added. 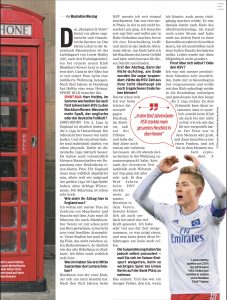 “There was a hard phase in which I was not very well. I needed some time and wanted to think about it in peace before I made a decision and plunged into the next adventure.

“In the end, I had the best feeling at Blackburn and made a conscious decision to take this step.

“First of all, I want to climb up the table with Blackburn. I didn’t come to the club to play in the middle section of the table.

“My big wish and big goal is Wembley. It’s where the play-off finals are played for promotion.”

Chelsea player says it “will be very difficult” to agree Blues...

Player confirms he will move to Norwich next season – ‘Firmly...