Home Europe “I was very disappointed. Furious, even” – Everton starlet opens up about...
SHARE

For David Henen, staying at Everton has never really been a priority.

Already admitting last year that he’d rejected a five-year deal offer from the Toffees as he wanted to play first-team football regularly, the Belgian starlet looked like one of the guaranteed departures this summer, but that never materialised.

Speaking to La Meuse in Belgium, the 21-year-old revealed the reasons behind his extended stay at Goodison Park, and it wasn’t up to him.

He said: “To be completely honest, it wasn’t a personal choice. Everton didn’t want to let me go, either on loan or permanently. They told me they wanted to keep their best young players at the club since they are going to play Europa League this season.

“It wasn’t through lack of me trying, as I really wanted to go and find a club where I could play regularly. That’s all I want. However, they didn’t want to hear anything about it. At the time, I won’t lie, I was very disappointed. Furious, even…

“In the end, with a bit of time, maybe it’s a blessing in disguise. Their refusal shows they believe in me. They even told me they want me to integrate the first-team. They said: ‘We don’t want to let you go, only to regret it later and have to spend €20m or more to bring you back’. 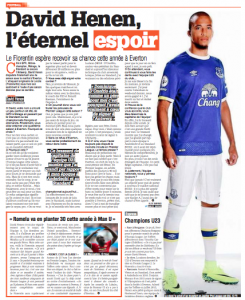 Now that he has his assurances, David Henen seems a bit happier, but that doesn’t mean he won’t try again for a move if promises aren’t kept, stating that he’d be looking for a loan move in January if he doesn’t get enough time.

Set to sign his new Toffees contract in the coming weeks, the forward also revealed he had a few contacts in June with Standard Liège and Antwerp, where Luciano D’Onofrio, a manager he gets along with, showed some interest, which made him want to sign there.

Yet to play a minute of Premier League football, Henen is getting desperate, even being told by his entourage that he needs to leave, but the youngster understands these things take time, especially in at a big club like Everton.

For now, he’ll have to make do with reserve football, captaining the U23 side.

His time will come it seems, he just needs to be patient.