Philip Billing probably hasn’t had the transfer approaches he’d expected so far, at least if Ekstra Bladet claims are correct.

The Danish newspaper says the Huddersfield Town player is ‘working with one of England’s top agencies’ to try and find a new club.

That clearly hasn’t resulted in success yet, and the 23 year old is expected to use the just started UEFA European U21 Championship as a ‘starting point’ for his transfer, which likely means he hopes to impress and attract interest from other clubs.

He’s able to represent his country, despite being overage, because he was within the limit when qualifying started. It would be thought the extra maturity and experience should give him an advantage over the majority of players at the tournament.

With Huddersfield slipping down to their relegation fate, in March Billing talked up a transfer when speaking to the Danish media.

At that time, Ekstra Bladet quoted him as saying: “I have been in Huddersfield for a long time, so this summer it is time to try a new challenge.” 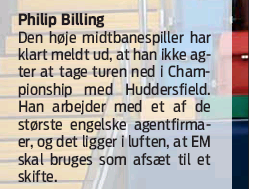 He elaborated further on that, making his transfer stance as clear as he possibly could: “I’ll try something new. The Premier League is great and I love the English football culture. I know there is interest from others in the UK and abroad.”