It’s coming to that time of the year when ambitious players at relegation candidate clubs are getting itchy feet… and becoming less cagey talking about it.

That it also coincides with an international break means there’s direct comments being given to the media.

Earlier this week, Huddersfield Town’s Jonas Lössl spoke to the Danish media and expressed his happiness with transfer interest: “It’s a huge honour. These are huge clubs. Some I could only dream of playing for. It’s a pat on the shoulder and proof that I did well when I was in France and also in the past few seasons, and that I’m currently standing on a springboard to take a step I’ve always wanted. Whether it will be there will be exciting to see.”

Also speaking to the Danish media, this time Ekstra Bladet, Billing said: “I have been in Huddersfield for a long time, so this summer it is time to try a new challenge.” 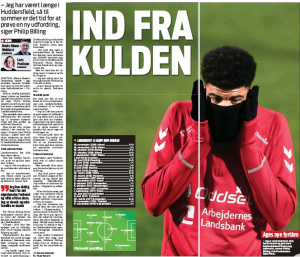 He elaborated further on that, making his transfer stance as clear as he possibly can: “I’ll try something new. The Premier League is great and I love the English football culture. I know there is interest from others in the UK and abroad.”

And, given he’s looking at the exit door, he doesn’t expect to play much for Huddersfield between now and the end of the current campaign: “I think the coach is betting on those who will continue to play in the Championship next season.”