Home Europe Guardiola wants 17-year-old at Man City ‘immediately’ – Have been after him...
SHARE

Players such as Paul Pogba, Emre Can, Aaron Ramsey and Adrien Rabiot all made the switch to Turin after letting their contracts run down at their previous clubs, and the Serie A champions are now trying to get a player to do so again as they fight off competition from Manchester City.

We’re talking about Edouard Michut, a 17-year-old current at Paris Saint-Germain on a youth contract, who has attracted the interest of a number of big European clubs, including City.

We’ve covered a couple of articles on the matter already, as the French media stated Pep Guardiola’s interest in the midfielder is ‘very real’, enquiring about him around the same time.

That was back in December 2019, and nothing has really changed, as Corriere dello Sport explain Manchester City are still after him. 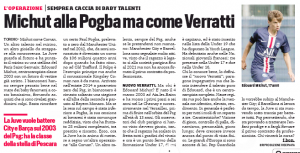 In fact, while Juventus are working on trying to get him on a free and Barcelona have been working to get him for some time, Guardiola simply wants him at City ‘immediately’.

That suggests the Cityzens could be prepared to pay a fee to get Michut, unlike their signing of Claudio Gomes, the last Paris Saint-Germain youngster they signed, who arrived on a free.

We’ll see how desperate Guardiola really is for the 17-year-old, but what the Spaniard tends to want at the Etihad, he tends to get.