There’s been something of a transfer war going on between Barcelona and PSG in recent years. When Marco Verratti seriously flirted with a move to the Camp Nou, and was even seen posing with a Catalan newspaper detailing the potential transfer, the French club weren’t happy at all.

Verratti ended up firing his agent and making an awkward public apology, and not so long later PSG paid Neymar’s release clause.

Aside from the big names there’s also been some tussles for youngsters, with Xavi Simons leaving Barcelona for the Ligue 1 champions in the summer.

There’s been talk of various revenge opportunities, and Manchester City could find themselves involved in another transfer fight.

Monday’s edition of Le Parisien talks of scouts continually watching Edouard Michut, a 16 year old midfielder with PSG’s U17s. It happened at the weekend, and the French newspaper says interest from Manchester City, Barcelona and Valencia is ‘very real’. 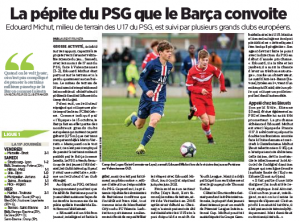 Snatching him away next summer would be Barca giving some pay-back, and whilst there’s no further details on what any of the interested clubs plan to do about Michut, City may have the advantage of being not quite so controversial a move.