Leeds United continue to be considered one of the main contenders for the signing of Robin Koch from Freiburg.

The Portuguese media has another story about the defender today, with Record saying Benfica are not very confident they can land him.

The reason is that given the Coronavirus crisis, the Eagles have decided not to make investments of over €10m in the next transfer window.

This is the exactly the amount the German press has been saying that Freiburg want for Koch. And the list of clubs who want him should only make his price bigger. 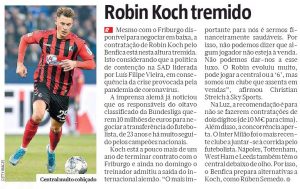 Record writes that Leeds United are along with Inter Milan, Napoli, Tottenham Hotspur and West Ham United in the race for the 23-year-old.

Benfica now have another priority, Olympiacos defender Ruben Semedo, in case they sell Ruben Dias in the summer.

So that should be one less club to fight Leeds in the battle for Koch.