After leaving Paris Saint-Germain, Dani Alves is now available on a free transfer and is once again a target for Manchester City, two years after he came close to joining them in 2017, claims Sport.

It’s reported Pep Guardiola considered the defender for City before the start of the 2019 Copa America, which was won by Brazil.

Guardiola knows the player very well having coached him when the two were at the Camp Nou. Following Alves’ ‘excellent performance’ for Brazil at the continental tournament, it has only ‘reaffirmed’ Guardiola’s conviction.

The 36-year-old will be available on a free transfer and the English club’s manager believes Alves will be an ‘ideal’ signing to put pressure on Kyle Walker.

However, an ‘administrative problem’ prevents City from signing Alves. 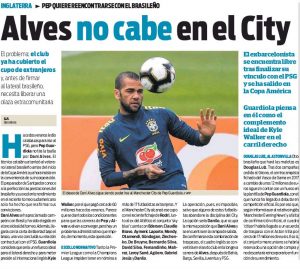 Sport states the Premier League and the Champions League prevents clubs from naming more than 17 foreign players in the squad and City have reached that quota.

The only way possible for City to sign Alves is by offloading his compatriot Danilo, who also plays in the right-back position.

To be fair, they would have had to do that anyway, and that was also the condition for Joao Cancelo arriving.