It was also explained the 20-time English champions even contacted the Spaniard’s entourage.

The 24-year-old has a release clause of €150m in his contract, not thought to be too out of reach.

Saturday’s edition of AS claims Manchester United ‘intend to pay’ the figure, which has seen Atletico jump into action… as was likely the whole point of the claims in the first place.

Atletico and Saul were in talks over a new deal in April, which was later stopped. It has now been resumed as Diego Simeone’s side have started negotiations with Stellar Group, the agency which represents the player.

The new contract will only see Saul’s salary increase, while the length of the contract and the termination clause will remain intact. If the negotiations between two parties are successful, the Spaniard will be the ‘highest paid player’ at Wanda Metropolitano.

Jan Oblak is the highest paid player at Atletico currently and he earns around €10m net per season. Saul is likely to be earning similar wages as the goalkeeper, if he agrees to a new deal. 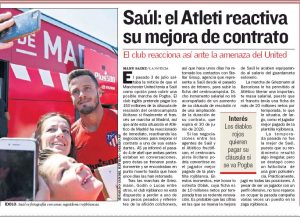 Even if Atletico and Saul find an agreement to increase the latter’s wages, that should not rule out Manchester United given the clause would remain the same.

However, it’s highly questionable interest from Old Trafford is a serious as presented. If it was then surely Atleti would be looking at a higher clause.