Home Europe “There’s talk” – Spaniard quizzed on interest from Tottenham and others –...
SHARE

Catalan newspaper Sport have carried an interview with Dani Olmo, during which the Dinamo Zagreb star was asked about the rumours linking him to Tottenham Hotspur, Manchester United and other clubs.

Asked specifically about Spurs, United, Bayern, Atletico and PSG, Olmo said: “There’s talk about a lot of teams and many more rumours. I don’t know what is true and what isn’t. I’ve wanted to disconnect from everything and when I have the chance to speak with my agent, we’ll see.

“It’s only just begun. I arrived home after a short break and I still haven’t spoken to my agents or my father. I’m expected back at Dinamo next week so we’ll see what happens.”

On July 12th, we carried a report from Mundo Deportivo, who stressed the 21-year-old has decided to join a club outside Spain who will play in the Champions League next season.

It was also explained the option of the Red Devils was ruled out as Bayern Munich, Spurs and Liverpool were named as potential destinations for the Euro U21 winner.

When asked about the possibility of returning to his former club Barcelona, Olmo stressed that he has not ruled out any club as of now.

“I don’t know if there’s an offer from them or not. I’m not ruling out any team. Out of respect to everyone who is interested in me, I’m not going to say anything. You have to respect them all,” the attacker stressed.

Olmo stressed that he is looking to leave Dinamo and join a club where he gets regular playing time.

“…what we’re looking for is a sporting project which is ready. Similar to what Dinamo offers because, right now, what I need to do is play. I’m young and I think I could give a lot more now and in the future,” the player added. 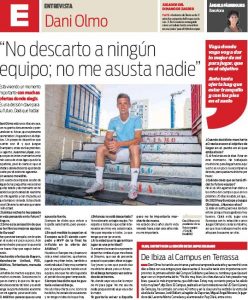 Sport further questioned as to when he will announce his next destination, he said: “I don’t know. My agents have told those at the training centre that in the next 20 days we’ll know, so.”

Recent reports coming out of Spain have suggested Tottenham are the favourites to sign him in the summer transfer window.