Nelson Semedo is back in the Portuguese newspapers. The Benfica right-back hasn’t been getting many mentions lately, but there’s a special reason for his return today: Barcelona would be closer to signing him, but of course there’s still room for Manchester United and Manchester City.

According to Record, the Catalan side are back with an offer of €30m plus bonuses which can make the deal reach over €50m.

This €50m is what Benfica would be demanding up front, but the Portuguese club can bend, as they always do. The newspaper claims that if Barça raise the first bid to €35m, president Luis Filipe Vieira will consider it will be easier to get to the €50m after bonuses, so there’s a better possibility the player will be sold. 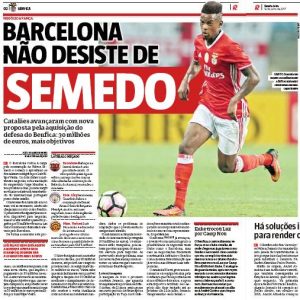 A story like this couldn’t be published without mentioning English clubs, so Manchester City and Manchester United are both dragged into it.

Starting with José Mourinho’s side, they say the manager is an admirer of Semedo and there was the possibility of a deal in the winter. However, they don’t build up the chance of one now.

In Manchester City’s case, there’s still a little bit of hope. It’s claimed that after failing to sign Dani Alves, the club are now in negotiations with Monaco’s Benjamin Mendy. Meanwhile, they don’t ‘lose sight’ of the Benfica player.

The way the claims are presented, Record believe Manchester City could be likelier than Manchester United right now, due to their need.