Olivier Giroud’s comments leaving his Arsenal future open have been taken more seriously in France than they seem to have been in England. Whilst here there’s an assumption that Giroud will just get on with it, and live in Alexandre Lacazette’s shadow, living on scraps like he did last season, in France that’s not seen as such a good scenario.

With the World Cup on the horizon, if Giroud spends a season playing second fiddle to Lacazette then there’s every chance he’ll lose his place to the former Lyon striker, and that’s of course something the Arsenal player will want to avoid.

And Everton is once again named as an option. 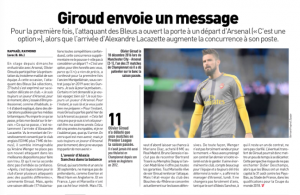 media, with there seemingly a desire Giroud returns to Ligue 1. But Giroud himself would prefer staying in the Premier League, and that’s where Everton comes in.

L’Equipe say, along with West Ham, Everton are a ‘suitor’ for the player, and would therefore be a real option for him this summer. Everton have already secured the return of Wayne Rooney, and had already signed Sandro, so perhaps Giroud would be seen as too near the mould of the other two.

That would be down to Ronald Koeman, and what the manager feels Everton need following Romelu Lukaku’s exit.

Lucas Digne talks about ‘honour’ of Everton recognition and the importance...