Home Premier League Chelsea ‘There is the green light’ – Club have ‘general agreement’ with Chelsea...
SHARE

With Inter’s season now officially over following their dramatic loss to Sevilla in the Europa League final courtesy of a Romelu Lukaku own goal, the Serie A side are set to sit down and take stock of the campaign.

One of the big decisions is whether or not to keep Antonio Conte at the helm, with reports that Max Allegri could return from his sabbatical to take over.

However, something that won’t change regardless of whether or not the former Chelsea manager remains or not is Inter’s interest in Emerson Palmieri.

The defender appears to be out of the picture under Frank Lampard, and there have been multiple rumours that both the Milan club and Juventus want him for next season.

We’ll have to see whether the latter still do after Andrea Pirlo take over, but Corriere dello Sport on Monday explain Allegri coming in won’t lead to a new target for the left-back role. 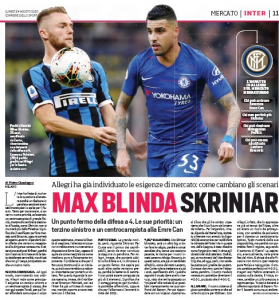 While he would want to keep Milan Škriniar around, there ‘is the green light for Emerson Palmieri, with whom Inter already has a general agreement’.

However, they still ‘need to negotiate’ with Chelsea to get a deal officially over the line.

There are few details here, but if there were any members of the Stamford Bridge faithful worried that a change of manager at Inter would mean fewer options for the unwanted defender, rest assured, that doesn’t appear to be the case.