Losing 2-0 to Rangers in their opening group game of the Europa League, Standard Liège will head into Thursday evening’s fixture at Ibrox with revenge on their mind.

The Belgian side have only picked up three points so far in the competition, coming from a 2-1 win over Lech Poznan last week, and if they stand any chance of qualifying, they need to fly away from Glasgow with another three.

However, they will have to face Steven Gerrard’s side without one of their important midfielder, Gojko Cimirot, who, according to La Province, will sit out the Rangers game due to some discomfort to his hamstring.

The Bosnia international, who has taken part in the entirety of Standard’s Europa League campaign and started more than half of their league games, has stayed in Belgium alongside Mehdi Carcela, who is still trying to regain fitness after spending three weeks trying to get rid of Covid-19. 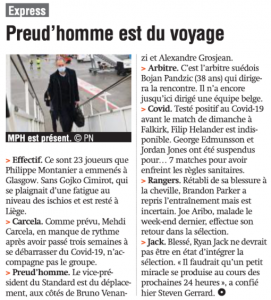 This will be a boost for Gerrard and his men, with Rangers still needing to win the game in order to remain clear of Benfica, currently on the same points as them in Group D.