Borussia Dortmund are currently sixth in the Bundesliga and their participation in next year’s Champions League is in serious doubt.

It was announced on Monday that Marco Rose will be swapping Borussia Monchengladbach for BVB at the end of the season, and once he gets there he may find at least one of his star player’s missing.

Jadon Sancho spent much of the early half of 2020 being linked with a move to Manchester United, with the rumour being hyped repeatedly and from various quarters. Dortmund set a deadline and a minimum price of €120m, and the German club were quite cocky about sticking to that, as was their right.

Now things are different, and Kicker report a ‘transfer is coming in the summer’ for Sancho. In their latest magazine it’s stated Sancho can leave as long as the offer is ‘financially suitable’.

It’s accepted that reaching €120m in the coming window is unlikely, and Dortmund will have to accept a compromise.

Manchester United is clearly the most obvious destination, yet it’s hinted there’s likely to 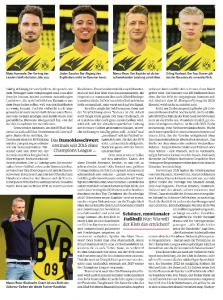 be widespread interest. Despite Kicker saying ‘there’ll always be a market’ for Sancho, there’s not going to be a lot of clubs spending €70m+ on players in the summer, with the Red Devils one of the few sides who will likely be able to.

Dortmund’s wobbling stance, and need for money, is good news for Manchester United, yet don’t be surprised if the German media try to drag more clubs into the drama in the coming months.