This week’s edition of SportBild has a feature on potential Bayern Munich exits. Whilst doing that, the German magazine obviously had to take a look at which players the Bundesliga champions could sign.

Leroy Sane gets a mention, having been linked with a move to Bayern for around a year. Kai Havertz is another long term target for the club, yet it’s thought signing him will be harder.

SportBild say a lot will depend on how concretely other clubs move for the Bayer Leverkusen player, and then Manchester United are pushed out as potentially more interested than others.

As often with media close to Bayern Munich, it’s hard to tell how much of this is simply from that club’s perspective, and perhaps to give an excuse for not making the 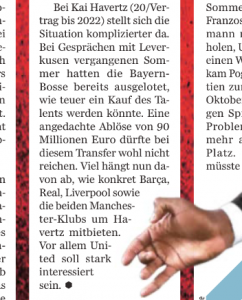 signing, or to provide a list of defeated competition should they do so.

Bayern had estimated a €90m transfer fee for the player, and it’s now thought such a fee won’t be enough, which could prove a problem for them.

It’s worth noting that Barca and Madrid interest hasn’t really been covered strongly in Spain.