Towards the end of 2019 it was reported in Portugal that Gedson Fernandes had left his agent Miguel Pinho to be represented by Pini Zahavi instead.

As transfers claims grew around the player last week, with much of it seeming like complete nonsense fed to the media for hype, the agent issue was brought up again.

Towards the end of last week, and before the reports of a Tottenham move, it was reported in Portugal that West Ham and Everton were backing away from a potential deal because of the complicated agent situation.

Tottenham get coverage in several Portuguese newspapers today, but the overriding slant is what a mess the situation is.

A Bola state there’s been many agents involved, and add: ‘Firstly, there are two Portuguese businessmen in action, one who needs no introduction and another who has been traveling a lot to England in recent months, because of the most popular player in our championship.’ 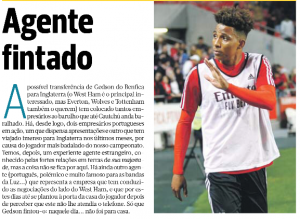 The one needing no introduction is almost certainly Jorge Mendes, whereas the other is Pinho, who also represents Bruno Fernandes.

They go on to say: ‘Then we have an experienced foreign agent, known for his strong relations in his majesty’s land, but it doesn’t stop there. There is also another agent (Portuguese, controversial and very famous around Benfica) that represents the company that has been conducting negotiations on the West Ham side, and that these days even turned up at the door of the player’s house after realising that he wasn’t answering the phone. Only Gedson feinted him: that day… he didn’t go home.’

The experienced agent could well be Zahavi, although it’s unclear who the other one is.

Record report that after West Ham and Wolves interest, Tottenham are now ‘closer to an agreement’ on an 18 month loan with a €60m buying option. That option isn’t mandatory, so would be completely down to Spurs.

A €60m fee for the player now would be wild, he’s a 21 year old who is very highly rated but he’s been struggling to get in Benfica’s team and hasn’t progressed this season in that respect.

West Ham and Wolves are said to have submitted offers, however, both were rejected by Benfica. 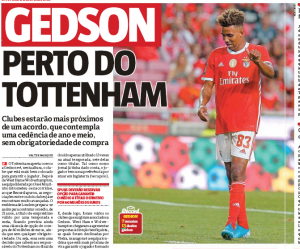 O Jogo have it a little differently.

They agree that Mendes is leading things, and report a move to Tottenham could be completed in the ‘next few hours’. They also agree on the 18 month period, but state the purchase option ‘can be up to €50m’ and that Spurs will pay €4.5m for the loan.