Amath Ndiaye Diedhiou, simply known as Amath, is a winger who plays for Getafe. The Spanish club secured his services from Atletico Madrid last summer and the two clubs retain 50 percent each of the player’s rights.

Slaviša Jokanović’s side are willing to offer £10m to sign the player. Atletico included a buyback clause in Amath’s contract when he joined Getafe and they have a final call on deciding his future.

Diego Simeone’s side are unlikely to exercise the buyback option, with the report claiming re-signing Amath does not appeal to Atletico. Fulham are “serious” with their offer for the player and want to land the player this summer. 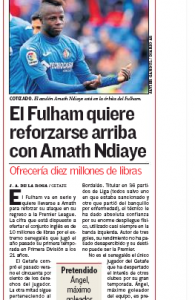 Jokanović will be looking to strengthen in almost all areas after Fulham secured promotion to the Premier League. The Cottagers achieved promotion after defeating Aston Villa 1-0 in the Championship play-off final.

A final decision will be made on Amath soon, and Atletico will be a part of the process.