In March, when the football world was backing Per Mertesacker for speaking openly about his struggles with pressure in football, Lothar Matthäus took the opposite line.

The German football legend, who is beginning to overshadow his achievements with his mouth, explained Mertesacker could have quit, shouldn’t have felt the way he did, and explained a career in coaching would be ruled out because the Arsenal veteran wouldn’t be able to tell his players they simply have to deal with situations.

It was typical Matthäus, and so are his comments about Mesut Özil in Tuesday’s edition of Bild.

Germany had a poor start to the World Cup with defeat against Mexico, and the reaction has been strong.

Julian Brandt was slammed for taking a selfie with a child when leaving the pitch. The 22 year old stuck up for himself, quoted by Bild as saying: “I wanted to go down the player’s tunnel, then came the little boy and screamed. In the second you do not think about it. You do the kid the favour or not. I took the phone and took the selfie. I did not think anything of it.”

Not a big deal, but it’s still rumbling on. 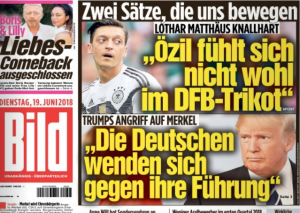 Bild’s Tuesday front page has two headline stories. One is Donald Trump’s fact-ignoring mini rant at the country, and above is Matthäus rant at Özil.

Perhaps annoyed the Arsenal player doesn’t sing the anthem but instead choosing something else as a vehicle for that irritation, Matthäus said: “I emphasise: I have no problem at all that Özil does not sing along with the anthem. This is up to each player, whether he has German, Turkish or African roots.

“But what I have observed after the anthem in Moscow, made me very angry: Ten German players have waved into the audience, given the fans a sign. Only Özil didn’t.

“This makes it obvious to me: Özil doesn’t understand why there are such great discussions in Germany about him. He’s unaware of what people in Germany expect from a national player. It would have been right to make a commitment to Germany after the error of the Erdogan photo, to open to the fans.”

And this is the crux, not a failure to wave.

In Germany, Özil and İlkay Gündoğan meeting Turkey’s Erdogan caused a huge fuss, rightly or wrongly, and was a big story leading up to the World Cup. Angela Merkel and others asked that everyone move on and put it to one side, but Matthäus was never likely to do that, especially after the Mexico match.

The 57 year old pundit continued: “What displeases: His body language is negative. He is in the game without joy. I often have the feeling that on the pitch Özil doesn’t feel comfortable in the DFB jersey, is not free, almost: as if he does not want to play. There is no heart, no joy, no passion. After the last impressions, it is not excluded for me that he withdraws from the national team after the World Cup.”

We can all pick up the insinuations.