It’s claimed the newly promoted Premier League club are looking to strengthen their goalkeeping position in the ongoing market as Marek Rodák’s displays have not been entirely satisfactory.

Therefore, the Cottagers have set their sights on the France international and have initiated contacted with his agent, Mino Raiola. He’s valued around €8-10m.

Apart from Fulham, Rennes are also interested in the keeper, and they can offer him Champions League football. Despite this, the English club have significant advantages over the Ligue 1 side when it comes to signing Areola.

The PSG custodian recently bought a house in the English capital and the possibility of living in London pleases both the player and his wife.

Areola earns €700,000 per month and Scott Parker’s side can afford to meet his current wages, which Rennes may not be able to offer. These two arguments favour Fulham over the French club.

L’Equipe, however, are of the belief joining Rennes over Fulham would improve the stopper’s chances of making it to the France squad for next summer’s European championship.

TuttoMercatoWeb also report Fulham are interested in Areola, but on a loan deal. They state the player has ‘received a proposal’ from the English club.

It’s claimed Areola purchasing a house in the English capital could be a ‘determining factor’ for him to pick Parker’s side over other suitors like AC Milan and Rennes. 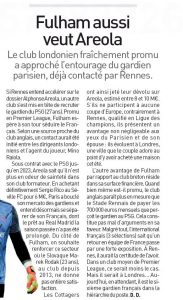 After spending the last two campaigns in the French and Spanish capitals, TMW add Areola is ‘ready to play in another European capital’ next season.

Areola is aware he will not have opportunities at Parc des Princes after the Ligue 1 winners completed Sergio Rico’s signing on a permanent transfer.