Manchester United have been linked with Real Madrid’s Sergio Reguilón over the last week or so.

The left-back was in fine form during his season-long loan stay at Sevilla, and his impressive displays saw him debut for Spain on Sunday.

However, the 23-year-old has failed to convince Zinedine Zidane as the Frenchman wants to continue to bet on Marcelo and Ferland Mendy.

According to Mundo Deportivo, the defender will report at Real Madrid today. Reguilón is waiting to sort out his future, and the report adds ‘everything indicates’ he will leave the club this summer. However, there’s no mention of where he could end up next season.

Sport focuses on the Red Devils’ interest in the Spaniard and their title reads ‘Solskjaer tempts Reguilón’.

It’s claimed Ole Gunnar Solskjaer wants to bring in a new left-back this summer, and the Spaniard has become one of the transfer objectives for the Premier League side.

As per the report, Manchester United ‘would be willing’ to offer €30m to Real Madrid, and a salary of €5m (most likely after tax) to Reguilón.

Sevilla remain interested, but Sport state the better conditions offered by United could shift the balance in their favour. 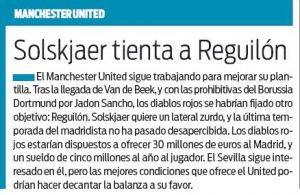 According to COPE, United remain ‘best placed’ to sign the Real Madrid player, although the Old Trafford club don’t want to include a buyback clause as part of the deal.

COPE mention Sevilla insisting on signing Reguilón, but only on another loan deal.