At the start of the week, reports from the English media claimed that Fulham are interested in signing Sporting winger Gonzalo Plata this summer.

The Portuguese press have been quick catching up with this story, and newspaper A Bola today features a piece explaining the situation the player is in.

The outlet points out that Plata has just had a positive loan spell at Spanish side Real Valladolid. And despite their buying option to keep him for €10m, that won’t be triggered.

That’s when the most interesting information comes. A Bola says Sporting manager Ruben Amorim doesn’t have the player in his plans either, so that will definitely favour another move away from Lisbon this summer. 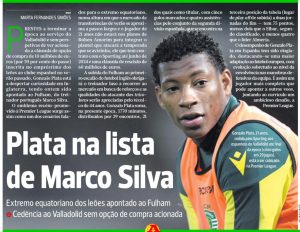 Plata is protected by a contract running until 2024 which includes a €60m release clause. That, at this stage, sounds irrelevant, as he’d obviously only move for much less than that.

A Bola points out the winger has been praised for his season in Spain and mentions what an ‘ambitious challenge’ it would be for him to move to the Premier League.

Now it seems a matter of Fulham making a convincing bid.