Their technical secretary want to bring in a player of top category to strengthen the squad and believe Hazard is the ideal signing. Officials at the club have been working silently to see if the option of signing the Belgium international is viable.

Sport claims that signing the Blues star is a ‘possibility’ as the player is considering leaving the west London club. He believes Chelsea have not yet reached the level of his personal expectations and the time is right for him to find a new club.

Chelsea failed to qualify for the next season’s Champions League. Due to this, it’s claimed their board could be open to the idea of allowing one or more of their star players, like N’Golo Kante, Thibaut Courtois and Hazard, to leave the club this summer.

Barcelona’s approach in signing Hazard will not be easy or straightforward. The La Liga winners are aware that they have to pay a similar fee to Chelsea as to what they paid to Liverpool while signing Philippe Coutinho.

In addition to this, Hazard’s salary demands of €15m per season net can be an issue for the Spanish champions. The Chelsea player will be one of the highest paid players at Camp Nou, if he joins Barcelona. 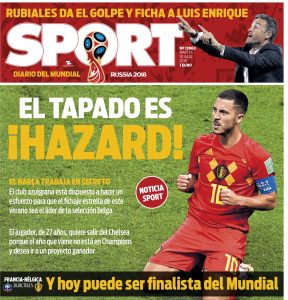 Sport’s report also mentions Abramovich and Chelsea ‘open the door’ for Hazard to join another club in the summer transfer window.